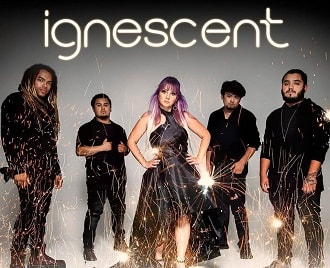 Female fronted and from Chicago, Illinois, Ignescent is a rock band founded by Jennifer Benson. Since 2008, the band has primarily touring throughout the Midwest and Nashville area. Ignescent’s new CD, Electrified, was produced by 4 time Dove Award winning & Grammy Nominated producer Travis Wyrick (10 Years, P.O.D.) and recorded at Lakeside Studios in Knoxville, Tennessee. The first song on the CD, “Calling Out to You”, was co-written with former lead guitarist of Skillet, Ben Kasica. Ignescent has had the honor of opening for Stryper, Eve 6, Flyleaf, Saliva, Letters From The Fire, Megadeth, Lacey Sturm, Art of Dying, Another Lost Year and many others as well as played at world famous - Rock Fest - in Cadott, WI. Ignescent recently co-wrote a song with Sameer Bhattacharya of Flyleaf. Ignescent combines their musical backgrounds to form a harmony that is both addictively musical and inspiring. Ignescent is more than just a rock band, they are real people with a combination of great stories. These stories, combined with moving guitars riffs and a driving beat create a sound people enjoy and relate to. Their influences include Flyleaf, Evanescence, and Paramore.