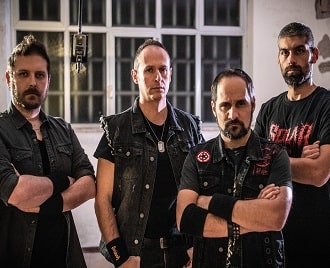 Formed in March 2001, Ibridoma was from the start the brainchild of Alessandro Morroni (drums) And Christian Bartolacci (vocals). Later on, Ibridoma took part in several music competitions, winning the first prize at the "ROCK AROUND THE ROAD" festival in 2004. Starting from this result, the band had the qualifications to begin composing own lyrics. Indeed, they released the "Lady Of Darkness" EP in 2005, obtaining a distribution contract with Nightmare Records (USA) and several good reviews on musical websites in Italy, Holland, France, Portugal, Brazil and Germany. In 2006 Ibridoma performed live in Lisbon (Portugal) supported by Mindfeeder, a local band. In 2007 Ibridoma took a stab at their second project, “Page 26”, that immediately meet the favour of critics. The new album has been followed by several live shows that lead the band to support also famous artists like The Dogma, Uli Jon Roth (former Scorpions), Richie Kotzen (former Poison / Mr Big), Rigo Rigetti & Roby Pellati (Ligabue), Linea 77, Theatre of the Vampire and Necrodeath. In June 2008, Alone In The Wind track appeared in Rock Hard Compilation. During February and March 2009, the band supported the Blaze Bayley’s Italian tour. After this tour the band starts to work to the first full length: "Ibridoma", published in 2010 by UK Division and SG Records. After the first album the band starts to play live again, in 2011 Ibridoma starts to work to the second full length, produced by M. E. Baskette and published in April 2012 by SG Records .A new promotional tour follows the album release and Ibridoma play live with Rhapsody of Fire, Secret Sphere and Almah. Always in 2012, after an intense live activity, in November plays as Headliner in the principal Greek cities. In 2013 started to record their third album, produced by Max Morton and published by SG Records in 2014 published in May “Goodbye Nation”. In 2015 Ibridoma support Sabaton in the Russian tour (March), in July support in Rome Queensryche!!! 2016- the 4th album was released. The album was produced by Simone Mularoni at Domination Studio. There are two very special guests from IRON MAIDEN Paul Di Anno and Blaze Bayley. 2017- the band released an acoustic split album with adamas (route 77) 2018- the new 5th album City of Ruins was released , new official video clip Sadness comes . 2019 - some other show in Italy and a new official Vedio Clip “ Di Nuovo Inverno “ from City Of ruins.