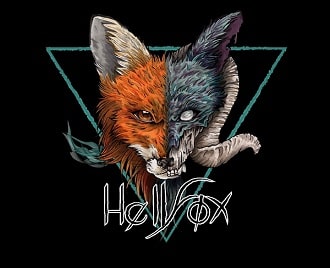 HELLFOX is an alternative metal (alt-metal) leaning towards melodic Death Metal. In spite of four rather different musical backgrounds, we’re on the same page on the inspiration we draw from Amorphis, In Flames and Dark Tranquillity in the process of songwriting, while we’ve chosen to detach from the Symphonic context, widely regarded as feminine, inserting acid, distorted synths in order to create a modern mood we felt our own and committed more adherently to the pop vibe of Greta’s melodic voice. The dualism existing within HELLFOX is not to be meant as a conflicting one, it’s rather the result of different voices interacting inside the human soul, different faces if we want to put it down this way. Faces mingling and generating the person in itself, in its entirety, who create and live in harmony and balance although seemingly clashing one another. We do not use masks to conform to the mass, while we don’t even want to distinguish ourselves at any cost, in a society where normality is a mere surface. The abyss, on the other hand, is made of countless personality facets, both for the collective and the single human being. Our message is accessible to all, everyone can recognize it in her or himself: that small, tiny voice in your head which attracts or repulses you…’cause nothing is normal for us, nothing is different.