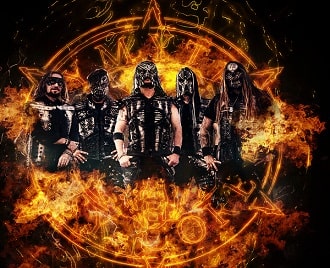 DYMYTRY is one of the most successful bands coming out of Central Europe lately. With their unique sound, which DYMYTRY calls Psy-Core, the band built up a strong fan base in their home country of Czech Republic. The band was founded in Prague in 2003. Since then, DYMYTRY released 5 studio albums, 4 EPs and a Live DVD/CD. Currently the band has more than 30.5 million YouTube views, 57000 monthly listeners on Spotify, 68000 fans on Facebook. In 2010, the bands line up was complete and their success began. DYMYTRY won the Wacken Metal Battle which gave them the opportunity to play in the Wacken Open Air Festival. One year later DYMYTRY performed at the Masters of Rock festival in Zlin in front of 30,000 fans. This performance was definitely a breakthrough for the band in their home territory. In 2015, DYMYTRY started their first big headliner tour with 32 shows in several distinguished venues all over the Czech Republic and most of the shows were sold out. A DYMYTRY show is more than just a rock concert, it is an adventure! These productions involve Big light shows, pyros, LED walls and costumed band members on stage!