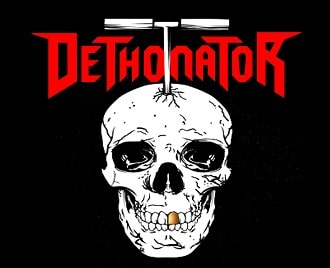 Originally forged in the East Midlands of England and now established in London, Dethonator are an exciting, four-piece Heavy Metal band. Starting out as teens in the summer of 2002, Dethonator have honed their craft over nearly two decades. If Judas Priest define Heavy Metal, then Dethonator are Damascus Steel; metal forged true with myriad layers of influence drawn from the many stylistic paths explored by their forebears over the past half a century. After 2013’s full length album, ‘Return To Damnation’ and 2014’s E.P, ‘Monuments to Dead Gods’, both self-releases, they reissued their self-titled first album through Killer Metal Records, Germany, which was remixed and partially rerecorded by the current line-up. This eponymous release features many of their most popular songs to date, such as ‘Harbinger’, ‘Shadows’ and ‘In The Place of The Skull’. In a year when the metal community has faced unforeseen challenges, Dethonator have, by the grace of the Metal Gods, found themselves able to enjoy the privilege of having an album in the wings. Dethonator conclude: “We hope that Race Against The Sun: Part Two should bring our “Race...” cycle to an end in fittingly ambitious fashion.