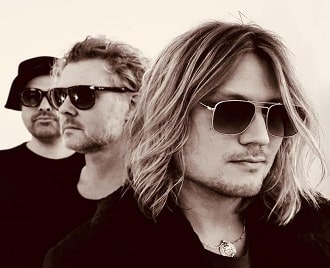 AltRock/Pop band ATRON release new single ""They Don’t Care About Us Now"" to all major platforms! The single is off of their debut album due out later this year. Martin Svensson started out as a Swedish popstar and songwriter. He signed to Universal Music, and Universal Publishing. Avicii actually recorded one of his songs – “Never Leave Me”, which ended up on his last album, Tim. But Martin never enjoyed the public side of that life, and in an attempt to escape his own music career he started ghost writing autobiographies for international celebrities instead – something he continues to do to this day. Recently, he has worked with Matt Sorum from Guns N’ Roses, Stacey Dash, Perez Hilton, Angie Stone, Fousey (the influencer), UFC star The Mauler, and many others. In May 2021, Martin had a chance meeting with Will Oaks, a young, good looking, badass singer and touring musician. By the very next day, Martin and songwriter Johan Lundgren, had written a draft of what would go on to become ATRON’s very first single. A week later, Will and their mutual friend, The Bridge, visited Martin at his home in Sweden, and they worked together to write and record the early versions of the ten songs that would go on to make ATRON’s debut album, Clouds.